skip to main | skip to sidebar

I spent every day at the hospital, and for the first couple of weeks at least I stayed the nights. I would never have left at all if my husband didn't convince me that I needed to get out of that place to keep control of my sanity. I did not want to leave her side for any longer than I had to. I would sit by her side and not move unless I had to (for obvious reasons such as to go to the bathroom or to attempt to put something in my stomach). I would just watch her, and watch everyone else around me... I couldn't bear to leave her because I saw all to often something happen with her and the nurse would be nowhere in site. To many times she would start to have a seizure and her O2 level would drop... more often than not I'd be the one grabbing the O2 mask to put over her face before the nurse ever showed up. I can't imagine any mother feeling comfortable leaving their child when you see things like that go on... you want to feel good in knowing that your child is being taken care of properly and paid attention to, but it just doesn't happen. The nurses were stretched to thin and there were others that needed taken care of to; but naturally you always want them by your child's side. I was very distraught with many things I saw go on in that hospital and the more I saw, the more aware I became and it made me want to be sure that everything they were doing for my daughter was what they were supposed to be doing...

So as time went on Sara went thru test after test, bloodwork after bloodwork...poking and prodding galore. No explanation could be found for her seizures... and Sara's were being very difficult to get under control. I hated that she had IV after IV and couldn't get any real nourishment; not to mention that she was black & blue from head to toe because of all the IV tries. They kept failing due to her veins collapsing. And the fact that she was mostly knocked out and we were losing precious time for development... but that was a double edged sword because seizures were preventing her from developing and if we couldn't get those under control we weren't going to get anywhere... so, people always say that sleeping allows us to heal in more ways than one, so sleep she did... but it was forced with all the drugs that she was on. Sara did finally get a PIC line in which was a blessing and I yelled at the ICU doc when I came back up from trying to eat something the one day & they wouldn't let me in to see her as they were trying to get yet another IV in to her...when I finally got in and saw how black & blue she was from all the needle marks I had had enough. I about flew off the handle and said that was it -- I could take no more. They were treating my beautiful baby girl like a pin cushion. That's when someone finally had the idea to do a PIC. Why noone thought of it before I'll never know... but it made me soooooo mad I could have choked someone... to think we could have saved Sara a lot of pain and stress over that... unreal.

Sara was started on Phenobarbital at first, then moved to Trileptal and then Topamax... I think that's the order... it was so long ago and she was on so much it's hard to remember what came when. She was also on Ativan to help her sleep at night.

It finally came time when the doctors wanted to send us home; we couldn't stay in the ICU units any longer as they didn't feel Sara was critical enough to keep there and they needed the bed space for others more in need. I understood but at the same time I was so nervous because I had become accustomed to the care in the ICU units (just the idea that she was in open view of everyone and could be seen). We were moved to a regular room in preparation to go home. In that time I had to make another decision...whether or not to get Sara a G-tube for feeding. She was taking some food by bottle again during her awake periods which was good because she hadn't lost her sucking ability. She enjoyed her binky quite a bit in the ICU and I was thankful for that. So, I pretty much had to make the decision on my own, and I knew it would be best for her to do it because I wanted to be able to get her the nourishment she needed and also her meds could be put in thru that. I was a wreck at the idea of my baby girl being sedated and put under the knife so to speak. I mean, this would be her first surgery. I couldn't get over how completely sick I was over this whole entire thing.

The day came...surgery. The anasthesia team talked to me about what they were going to do, and the doctor talked to me about the procedure and then it was time to take her back. I didn't want to let go of her... I just kept holding onto her little fingers... the guy that was going to do the anasthesia looked at me and just said "don't worry, we'll take good care of her". I looked at him and just started to cry more but shook my head as if to say "ok", and I let her go. The time waiting for her to get done was completely agonizing. I was there alone which made it worse. It was a long surgery... 5 plus hours. A time came when I started to get really worried because I was becoming one of the last to be in the waiting room and I started to wonder if they knew where I was, did they remember that I was here waiting?? Then finally, the call came. She was done.

Sara made it thru the surgery fine. I was able to see her in recovery. I was a bit shocked as to how big the g-tube was. I was kinda led to believe that it would be flush with the skin. It was not. It scared me at first, and yes, I cried some more once I saw it and looked at my beautiful little girl laying there sleeping and thinking of all she'd been thru so far in her little life. I didn't think it possible to hurt so much.
Posted by Keely at 5:15 PM 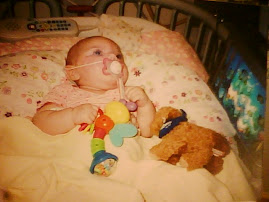 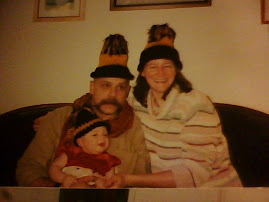 15 months; our one day of laughter 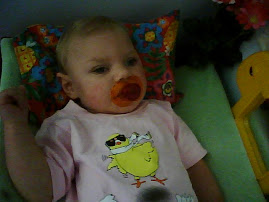